Four Ways You Can Support Refugees

Months after images of a demolished Aleppo circulated the media, people finally took notice because of one child’s blank and bloodied stare. The image of Omran Daqneesh, a five-year-old boy pulled out of Aleppo’s rubble was posted late Wednesday night. Within hours, every major media outlet, including CNN and even Fox News, shared the heartbreaking photograph.  A 17-second video shows the little boy, Omran Daqneesh, wipe his face before smearing his bloodstained hand on the chair beneath him.

In one short clip, we are reminded that the biggest victims in the current refugee crisis are children. According to the UNHCR, over half of the world’s 21.3 million refugees are under the age of 18.

Photos of dead and injured children appear online every day, but the image of Omran seemed to remind many in the West that, despite the best efforts of xenophobic and fear-mongering political and media pundits, the majority of refugees are in fact children. There are an unprecedented number of displaced people around the world: 65.3 million according to the UNHCR. There are more people displaced now than ever before in recorded history.

Last September the disturbing image of a three-year-old boy, Aylan Kurdi, who drowned while attempting to get to Greece by dinghy with his family stunned millions. The photo haunted me and after obsessively reading accounts of refugees in Greece, I decided I needed to do something.

After months of research, I finally found a way to get involved through Emergency Response Centre International. I went to Greece, visited multiple camps, met with officials and volunteers, and started a project with the help of friends and colleagues.

[I’ll share more about the project later in this post. The trip? Well, besides our ongoing volunteer project, I honestly don’t have much to share that’s positive, so I’ll save the rant for later.]

Many friends are asking similar questions this week: What can I do? How can I support? How can I get involved? Below are some suggestions. These are only a start and by no means an exhaustive list.

Honestly, if you’re culturally sensitive and don’t have an agenda, consider volunteering even if you don’t have the language skills. If you aren’t suffering from a ‘white savior complex,’ aren’t trying to spread your faith, and won’t prevent malnourished women fleeing conflict from getting formula instead of breastfeeding, you’re already ahead of the game. Greece’s 57,000 refugees are in dire need of support.

I’m part of a great project that you can support: I’m starting an educational project for refugee youth in Greek camps in partnership with ERCI, a trusted volunteer Greek NGO that’s working tirelessly on the ground. We launch at our first camp in Thessaloniki the beginning of September. You can join our efforts in a variety of ways, which I’ll explain in greater detail below.

2) Volunteer locally. Okay, volunteering locally varies depending on your location. Are there any refugees in your city? Neighboring community?

If you’re in the EU, it varies by country. If you’re in Germany, Spain, Portugal, Italy, Greece, Sweden, it’s easier for you to find an organization to volunteer with locally.

If you’re in Austria, Hungary, pretty much anywhere in the Balkans….you’re in some of the tougher places for refugees. I’ve heard firsthand about some harrowing refugee experiences in Hungary, where the police marched refugees to the border, beating them and preventing anyone from picking up any belongings that fell along the way. Other similar stories of police harassment have been circulating within refugee and volunteer networks throughout Europe.

Unfortunately for those who find themselves in a hostile environment, the “Dublin regulation” requires refugees to seek asylum in the first European state in which they are fingerprinted. This legislation has resulted in breaking up many families who made the journey to Europe separately. I met many toddlers and babies in Greece who have yet to see their fathers since many of these men made the perilous journey ahead of their pregnant wives, finding themselves separated after the borders closed in March.

For those of you in the United States, there are plenty of organizations that do great work with refugees too, including local organizations such as RRISA in the South. Contact your local organization – they usually need the most support with their growing caseloads. The United States accepted a small number of Syrian refugees so if you’re hoping to support the current crisis, you may want to look to volunteer overseas or provide financial support to those who do.

If you’re in Canada,  you can contact your local organization. Canada currently has one of the most welcoming policies for refugees, but many find integration quite a challenge.

Lebanon, Turkey, and Jordan are also great places to volunteer since they host the largest refugee populations. 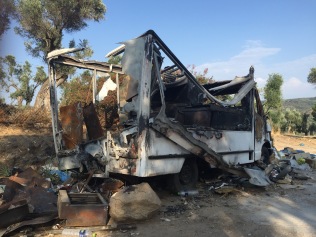 Destroyed During Protest Outside Moria

3) Be a conscious traveler. Are you visiting countries known for abusing refugees? Is your resort minutes away from a makeshift refugee camp? Don’t perpetuate their invisibility. You can define what being a conscious traveler means to you, but suggestions include bringing along donated items, fundraising, volunteering for a portion of your trip, or even refusing to visit places notorious for mistreating refugees. All the rhetoric and even some of the humanitarian relief attempts to deny their humanity (queue my rant about what I’ve witnessed, which I’ll save for another day) – don’t add to that.

4) Get political. No, but really. If you are in the United States or Europe, there’s plenty you can do to advocate on behalf of refugees in the current political climate. If you are in Canada, thanks for your service. There’s still plenty you can do to help their integration. However, we’re having a very different type of conversation in the United States.

Currently the United States met 86% of its total pledge. It’s still measly, especially when considering our role in destabilizing the region and our total population size. Multiple state governors refused to welcome refugees. While Huckabee’s ‘wake up and smell the falafel’ response was ridiculous, others seem to share the sentiment. Those of us who support refugees need to be more vocal in response to the rise in xenophobia and Islamophobia, and not just on our social media. Call your elected officials. Find out where they stand. More importantly, let them know where you stand because they’re hearing your opposition almost daily. Move past the Trump-Hillary debate and hold your local, state and federal officials accountable.

Still looking for a way to support refugees? Volunteer with me! I’m working with a respected Greek volunteer organization to build a pilot educational program for refugee youth in Greek camps. We’re launching at our first site, a progressive camp housing many vulnerable mothers and children,  in September and currently need financial and volunteer support.  You can donate directly to our Indiegogo or contact me to volunteer! We’re particularly looking for Arabic or Persian speakers, teachers, and mental health professionals. You can learn more about the project here.

You should also support White Helmets. The large NGOs often get the most love, but it’s the little orgs that usually lead the impactful work. They’re the ones scraping together resources to tackle major issues – and by being small, they all but guarantee that your donation goes directly to producing good work instead of covering major overhead. Don’t donate to the brand – give to the cause.

Of course, if you have any questions, you can contact me at: mana [at] ercintl [dot] org. 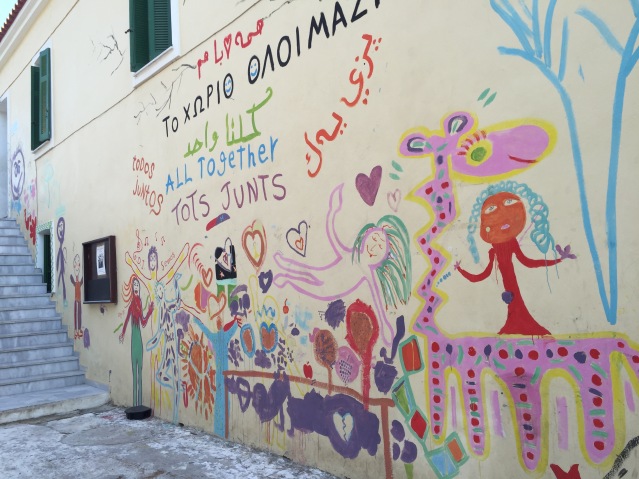 Mural at an unofficial volunteer-run camp in Lesvos, Greece